The Chester Kahapea Volunteer Chair of the Year award is bestowed annually to outstanding Sony Open volunteer who have demonstrated selflessness, aloha and made a sacrificial effort for the tournament. Tournament vice chairs, volunteer division heads and volunteer chairs select the honorees to receive these prestigious awards. 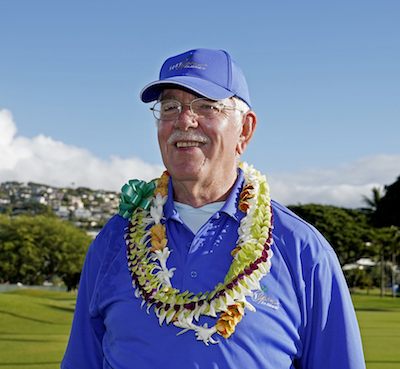 Gallery Control is all Jim Murphy knows when it comes to volunteering at the Sony Open in Hawaii. He has been with the committee 13 years, serving as chair the last four.  If it was a job, Murphy says he would have quit. He never worked this hard in his 47-year career with the federal government.  But it isn’t a job, it has become a passion. He feels like he has found his calling.

“I like interacting with people, I love the people,” says the 2019 Chester Kahapea Chair of the Year. “I like being in the environment and having a feeling of accomplishment.  At the end of the tournament I can just exhale, it’s over and it was an accomplishment. I made it from September basically all the way through and all the problems were resolved and nobody got hurt and nobody got upset.”
When you think of the scope of the Sony Open in Hawaii’s largest volunteer committee, that accomplishment is astonishing.  Murphy is responsible for recruiting, coordinating and overseeing eight teams with a total of up to 300 volunteers. He collaborates with other committees, PGA TOUR officials and the Golf Channel. He is first responder for nearly every problem that pops up at Waialae Country Club, and deals with unusual requests on a daily, sometimes hourly basis.
“To be perfectly honest,” he says, “I don’t think there is a committee out here more important to golf and this tournament than Gallery Control.  I think it’s the best committee. I get to see everybody, I’m involved in all that’s going on.”
It begins at home, where he deals with “a great deal” of paperwork. In the committee’s cart barn base, his volunteers come from Japan, Canada and all over the U.S. They are usually the first to see anything out of place. They report it to Murphy and he does what he does best or, by his definition, “I try to put out situations.”
He sees almost no golf, but he has seen nearly everything else that can happen on a golf course, from lost and found to spectators who have lost their way, literally and figuratively.  What he finds most satisfying is seeing smiles on the faces of his marshals at the end of the day, and no frantic phone calls at night.  Some years are harder than others to recruit the 300 people that are truly needed for his committee. But Murphy knows he could do it, if he only had time to talk to folks one on one. “I could make it attractive enough and be honest enough with you,” he says, “and you would trust me enough that you would come out and volunteer, give it a shot.”

Thank You for Supporting

Thank You to Our Volunteers