PGA TOUR picks SECOH as Charity of the Year Finalist 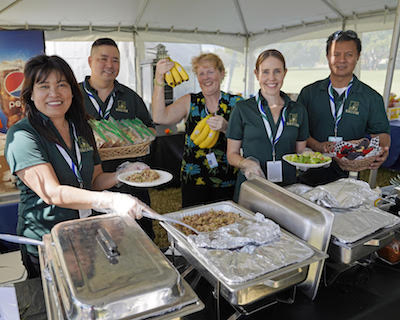 Each year, Friends of Hawaii Charities, tournament host of the Sony Open in Hawaii nominates one of its charity grant recipients to represent the event in the PGA TOUR's pick for Charity of the Year.  During advance week of the 2019 Sony Open in Hawaii, the Special Education Center of Hawaii (SECOH), a 2018 Friends of Hawaii Charities grant recipient, learned that their organization was selected as a PGA TOUR Charity of the Year finalist and would receive a donation of $5,000 from the TOUR.
Established in 1965 as a school for children with special needs, SECOH expanded in the 1980s when Waimano Home was deinstitutionalized and many of their residents were admitted to SECOH for care.  Today SECOH has expanded to serve a younger population of individuals with disabilities who have aged out of the Hawaii Department of Education public schools, most of them under the age of 27.
SECOH provides day services for adults with developmental disabilities in five community centers located in Waipahu, Kalihi, Ewa, Ewa Beach and Diamond Head.  The organization also offers adult day care services for seniors, specializing in supporting people with various forms of dementia at its Diamond Head center; and support services, which include personal assistance, respite and skilled nursing.
“People with disabilities deserve every opportunity possible to increase their social circle, develop skills, and participate in activities that are meaningful to them.  Often times, people with disabilities are not offered opportunities because it is assumed “they can’t….”  at SECOH, we believe everyone can, should, and will have a variety of experiences.” said Bridget Panee, president and CEO of SECOH.
Photo by Marco Garcia.  Volunteers from SECOH helped serve food in Caddie Hospitality at the 2019 Sony Open in Hawaii.

Thank You for Supporting

Thank You to Our Volunteers