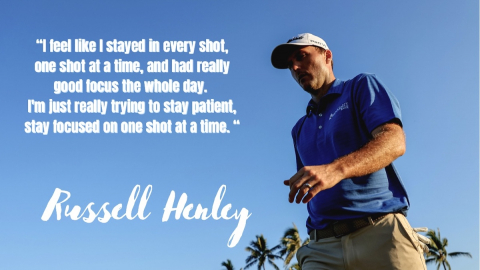 After recording his lowest 36-hole score of his career on Friday, three-time PGA TOUR winner Russell Henley followed that with a personal-best 54-hole score of 18-under 192 on Saturday.  He previously recorded a 193 opening 54-hole score in 2013 before winning that year's Sony Open in Hawaii, his first tournament as a PGA TOUR rookie. A three-time PGA TOUR winner, Henley is seeking his second Sony Open in Hawaii title to become the sixth multiple winner of the event.

"I figured it wouldn't be quite as easy as the first two days," said Henley, who opened with rounds of 62-63 and finished with a 3-under 67 on Saturday. "It's just not how golf works typically. I wasn't planning on making bogeys, but definitely wasn't expecting to shoot 8 under again. But at the same time, I felt really good about my game all day. I never really got too nervous or too ahead of myself.  I feel like I stayed in every shot, one shot at a time, and had really good focus the whole day.  I'm just really trying to stay patient, stay focused on one shot at a time."

Two strokes behind Henley, Hideki Matsuyama shot a 7-under 63 on Saturday with several impressive distance putts magically finding the hole.  "Putting was a strong point today. Even my missed putts found the hole," Matsuyama said. "I was lucky today."

Henley and Matsuyama will complete together in the last group on Sunday, starting out at 1:15pm.  Matt Kuchar, 2019 Sony Open in Hawaii winner, is four strokes behind the leader, tied with three other players Adam Svensson, Seamus Power and Haotong Li, chasing Henley and Matsuyama into the final round.  Kuchar, the only player without a bogey this week, is bogey-free through 54 holes for the first time in his career.