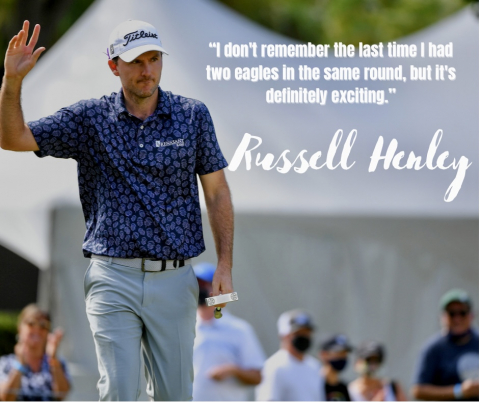 Aloha Friday was another exciting day for the history books at Waialae with 2013 Sony Open in Hawaii champion Russell Henley at the top of the leaderboard after recording his personal best opening 36-hole score (125) and the lowest opening 36-hole score on the PGA TOUR since Justin Thomas opened with 123 en route to winning the 2017 Sony Open. Henley followed his first round 62 with a 63 on Friday, making up for bogeys on his 7th and 10th holes with five birdies and a pair of eagles.

Playing on a sponsors exemption, Haotong Li opened at 63-65—128 for his low-opening 36-hole score on TOUR while 2019 Sony Open in Hawaii champion Matt Kuchar went bogey free through 36 holes to finish at 3rd going into the weekend, four strokes behind the leader. Only one other player, Corey Conners, tied for fifth with 10 other players, is bogey-free through 36 holes.

World No. 1 amateur Keita Nakajima (T5) becomes the first amateur to make the cut at the Sony Open since Kyle Suppa in 2015 (T76). Nakajima is making his second start on the PGA TOUR since his T28 finish at the 2021 ZOZO Championship.

This week equals the lowest cut in Sony Open history (5-under/1998).

Charles Howell III who has already collected over $3 million at the Sony Open in Hawaii, made the cut for the 21st time in as many attempts at Waialae.