Innovative Collaboration Meets COVID Impact: The Strength of Our Giving 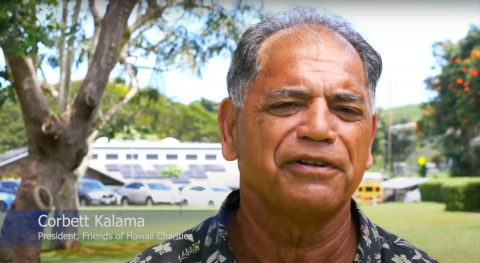 A record $1.3 million in vital funding was distributed to Hawaii charities from funds raised through the 2021 Sony Open in Hawaii with support from Sony Group Corporation

“A ‘ohe hana nui ke alu ‘ia,” when translated means, “No task is too difficult when undertaken by all.” This Hawaiian proverb became a truism today when Friends of Hawaii Charities announced that $1.3 million raised through the 2021 Sony Open in Hawaii PGA TOUR tournament has been awarded to over 130 Hawaii not-for-profit organizations. The groups selected as beneficiaries were identified as providers of vital support services for those in Hawaii dealing with COVID-related loss of food, shelter, safety, mental and physical health care.

"Title Sponsor, Sony Group Corporation, was keenly aware of the unique challenges presented by the first-ever no-spectator/hospitality event in January, and Sony Group executives met this challenge by providing a financial “commitment to ensure that Friends of Hawaii Charities would be able to meet its commitment," said Charity President Corbett A. K. Kalama  "They not only see the homeless in Hawaii; Sony’s commitment reinforces the actions taken to tell those at-risk that we see them, we are here to support them ,and their lives have value.”

On behalf of Sony Group Corporation, the Friends of Hawaii Charities also earmarked $100,000 of the $1.3 million charity grants in a first-of-its-kind collaboration with Hawaii Community Foundation (HCF), which matched the grant. Together, $200,000 was directed to support the City & County of Honolulu Rental & Utility Relief Program. Designed specifically for households across Oahu hit hardest financially by the pandemic, the support of Friends and HCF helps fund start-up costs for the non-profit groups – Catholic Charities and the Council for Native Hawaiian Advancement – managing the program, enabling federal funding to primarily be channeled into rent and utilities relief for Hawaii families.

“The Rental & Utility Relief program is an unprecedented level of support for the community and those in need,” said Mayor Rick Blangiardi. “I send a sincere mahalo to Sony Group Corporation and the Friends of Hawaii Charities for supporting this worthwhile program. Their generosity exemplifies our island value of coming together to give aloha and help people during difficult times.”

As the first full-field PGA TOUR event of the year, the Sony Open in Hawaii is the largest charity golf event in Hawaii.  With this year’s distributions, the annual event will have generated nearly $22 million dollars directed toward more than 350 local not-for-profits since 1999. In 2018, the PGA TOUR and Sony announced the extension of their partnership through 2022, securing the stature of being the third-longest-tenured title sponsor on the TOUR. A PGA TOUR tournament has been held annually at Waialae Country Club since 1965. In 1999, Friends of Hawaii Charities, Inc. became the host organization of the tournament with Sony as Title Sponsor.