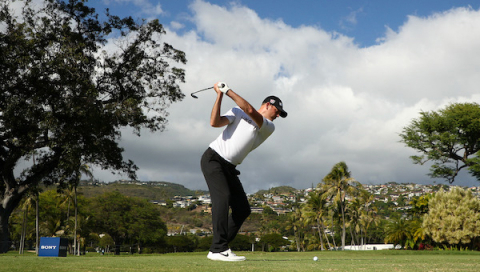 Brendan Steele’s bogey-free birdie-birdie finish propelled him two strokes ahead of the crowd after Saturday’s third round at the 2021 Sony Open in Hawaii. Steele is the tournament’s repeat 54-hole leader, in the same position moving into Sunday’s final round as he was a year ago before finishing runner-up to Cameron Smith after a playoff.  Steele’s third round 61 in this year’s tournament is his lowest career PGA TOUR round.  "I know I'm going to have to go shoot a great round (tomorrow)," Steele said, "I know it's going to be really hard. I know guys are going to be coming after me. There should be a lot of birdies out there even with the wind picking up a little bit. I know I'm going to have to shoot one of the best rounds I've ever shot to go win it. So that's what I'm going to try to do."

Kevin Na had magic number on his mind on Saturday.  He stocked his bogey-free round of 61 with seven birdies and an eagle on #9, but was hungry for more. "The fact that I had an outside look at a magic number, 59, was exciting. It was fun," said Na. "When I missed that putt on 17, I was so disappointed because I was really trying to make that putt to have a chance for 59, because you can definitely eagle last hole.  If I can make some momentum putts tomorrow, I think I'll be all right.”  Na finished the day two strokes back from the leader matched at sixteen-under with Chile's Joaquin Niemann going into Sunday's final round.

Last week's runner-up in Kapalua, Niemann shot a 63 on Saturday, capping his round with an eagle on his last hole. "It was huge. I wasn't really satisfied on my first 16 holes. I thought I was playing great. I thought I could put myself in a better position, and then finishing that way and making eagle on 18 made me really happy and gave me a bit of motivation for tomorrow."

It will be a fight to the finish with five hungry pros Peter Malnati, Charley Hoffman, 2013 Sony Open in Hawaii champion Russell Henley, Chris Kirk and Stewart Cink just three strokes back at fifteen-under and ready to make a run for the title.  Keith Mitchell, Daniel Berger, Marc Leishman and Nick Taylor are four strokes back at fourteen-under.

Due to anticipated heavy rain showers late Sunday afternoon, final round tee times will be moved up two hours.  The first groups will start out from Tees #1 and #10 and 8:20 a.m. with the leaders going out at 10:20 a.m.  The Final Round of the 2021 Sony Open in Hawaii will be broadcast live on Golf Channel from 11am-3pm HT and 4-8pm ET on Sunday.