2021 Sony Open in Hawaii in the Spotlight 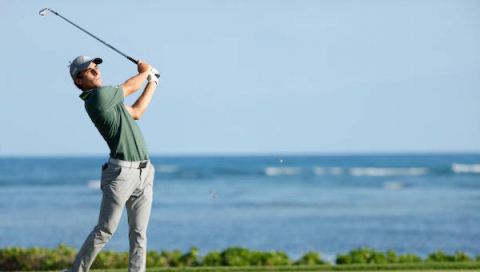 Joaquin Niemann, Jason Kokrak and Peter Malnati took advantage of the optimal weather conditions and firm fairways to share the lead after Thursday's opening round of the 2021 Sony Open in Hawaii.  The three shot matching eight-under 62s at Waialae Country Club.

"Doing best I can is kind of always my attitude, really," said Malnati, "But I'm trying to think. I've been really bad at golf for a lot of my PGA TOUR career. I've been on TOUR seven years and there's been several times when I've had no chance to win because I just haven't been good enough.  I don't feel that way anymore. I feel like right now -- I am even trying to think, what would be a course that just on paper wouldn't suit me and I can't even think of one anymore."  Yesterday he made nine birdies and one bogey to outpace the morning groups.

When Jason Kokrak won the CJ Cup at Shadow Creek last October, it was his first PGA TOUR victory in his 233rd career start.  Kokrak said about his win in Vegas, "After winning, after getting that monkey off your back, getting the first win, you definitely have a little bit of confidence and that just drives you to want to win more often and to become a better player.”

Twenty-two year-old Joaquin Niemann holed a 50-foot chip for eagle on the last hole Thursday to join the leaders Malnati and Kokrak at 8-under 62.   With his victory at the 2019 Sanderson Farms Championship, Niemann became the first Chilean to win on the PGA TOUR, but lost in a playoff last week to Harris English at the Sentry Tournament of Champions on Maui.  "Finishing with an eagle is always nice, Niemann said about his first round finish, "Good way to keep motivated for tomorrow."

Golf Channel cameras also gave a few minutes of coveted TV time to the lone amateur in the field, Punahou grad Evan Kawai.  "The experience was dreamlike out there," Kawai said, "It was a lot of fun.  Obviously I would have wanted it to go a little bit better but we stuck to our process. We fought to the end and got our first birdie on 18, so we'll keep it rolling into tomorrow."